A busy day at Arsenal, even with the manager reportedly in Paris. Or to adapt an unfair prejudice, perhaps because the manager was in Paris. New signings all round, ropey defenders sold on to QPR. The best day’s transfer business for this summer certainly. And supposedly there is one more to come tomorrow.

First off was Armand Traore, a prized asset in Queens Park Rangers battle for survival this season. One can only assume that the deal was too far down the road for Rangers to be able to pull out of it following his shambolic performance at Old Trafford on Sunday. Which ever way you look at it, selling the player was fantastic business. No, genuinely, I cannot believe it. They say that the English game is awash with cash and QPR, under new ownership, have tucked up like a kipper. They paid for him!

Next up, Nicklas Bendtner’s dad was hot on the trail of the exit for his son but it isn’t to Stoke. Big Daddy Bendtner though was giving nothing away to the Danish press, refusing any enticement to deliver the final destination for his son. Which leaves you to wonder if he is indeed leaving. Rumours surfaced in France that Marouane Chamakh was the subject of a Paris St Germain bid recently and perhaps Arsène has had a change of heart, preferring to release the Moroccan instead. No, I don’t believe that either.

Which brings us to the new boys. The only surprising one is Per Mertesacker, more of that later. Park Ju Young, or Chu Young Park whichever one you prefer, confirmed his signing, falling back on footballing cliches but we’ll forgive him,

I am very hounoured and I feel very happy to be at Arsenal. They are a team that I dreamed about when I was young. I am very proud to be an Arsenal player. I just want to show how good I am and prove myself. It feels like a big step up but that doesn’t mean I won’t be able to perform.

I will work very hard, I will train very hard and I will show that I am able to be part of this Arsenal team. I will work hard to prove myself and build a reputation with the Arsenal fans. I have to show what I can do on the pitch. I will do my best, show heart and give everything for this Club.

It would be interesting to hear his thoughts on the squad following the drubbing at Old Trafford, he must be looking at it and thinking he has a fair chance of starting every week. The reception has been mixed, nothing like a positive welcome for a player but perhaps that has more to do with the mood surrounding the club following the weekend than Park.

He will be joined tomorrow by Andre Santos, the Brazilian reportedly granted a work permit yesterday afternoon. A left back is desperately needed to restore balance to the back four and allow the best right back in the Premier League to revert to his natural position. Again, Santos has had a mixed reception, few people commenting have seen him regularly for his club side and with Fenerbahce embroiled in a match-fixing scandal, I would be reluctant to pass judgement on him even if I had. How can you be sure about someone’s ability when their opponents are allegedly chucking a match?

I read recently somewhere – either in The Secret Footballer column in The Guardian or a pundit passing on their wisdom – that the average transfer takes around ten days. It seems unlikely with Arsenal. Park and Santos may have been left-field signings, under everyone’s radar until the deals are all but completed but Per Mertesacker has been linked with Arsenal for years. This is as long running as Cesc to Barcelona and like the Catalan, this one is being done!

Arsenal fans are nothing if not demanding and before he has even signed, Mertesacker is being criticised for being too slow and having no Premier League experience. Neither did Vermaelen or Sagna – they did not turn out too bad either. And more to the point, as a metric man (2 metres tall if he is 6’6) surely Mertesacker is the monster centre back being demanded.

All of which begs the question, why leave it so late. Arsenal have proven that they can move swiftly and decisively – I don’t buy the panic buyer theory being peddled – so why wait until the last minute before doing deals. It would be good for an honest answer from the club so that we understand the ‘plan’ but I am not expecting it, just more ‘seagulls and trawlers’. 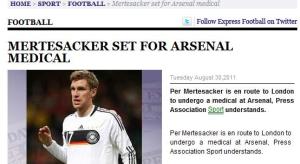 A picture? A PICTURE? What the hell is that doing here? Yea Gods. It’s all change everywhere around Arsenal.