The ‘Appy ‘Ammers struggle with the Crosstown Traffic this evening, in media eyes sacrificial lambs brought to the altar of The Emirates for a ritual slaughter. The sides meet for the third time with eyes drawn back to the Premier League following yesterday’s Champions League draw for the Quarter and Semi-Finals.

If Arsenal wanted to test themselves against the best in Europe, the route to The Bernabeu in May certainly presents those opportunities. I suspect Arsene might have preferred the first leg to have been in the Catalan capital but either way, Barcelona represents the sternest of tests. Arsene noted in his press conference that Arsenal will be ‘billed’ as underdogs. Suits me down to the ground, there will be a plethora of stories about how the squad is not good enough to compete with Barca and some will no doubt comment we should not even be in the same stadium (bring it on, Collymore!) but who cares what the media think?

Arsene does as he vainly hoped that the build-up would not be dominated by stories surrounding Cesc. Of course they will. Every press conference between now and then will be 20 minutes of transfer gossip and speculation, 30 seconds about the match. In a masochistic way, the coverage will be captivating; the English press will blame the Spanish media for the stories and the vicious circle will be completed as the roles are reversed. Supporters will be left in the middle wondering how an innocent comment can be twisted into so many different meanings, enough to make the Chinese wish that they had never whispered in the first place.

Wenger also noted that the venues for the two legs were not important in terms of their sequence:

Statistically it is not proven. We like to think in our job that to play at home in the second leg is an advantage, but it is not proven at all in the statistics. It is 50:50. These are ties where the quality of your concentration for 180 minutes and the form of the day is very important. We have to go into these games with the right focus

Sorry Arsene but being at home in the second leg is statistically proven to be advantageous. Since the Quarter Final stage was reintroduced in 1994/95, there have been 90 quarter and semi final ties; 49 teams who played the first leg away from home have progressed, 41 home sides have done so. Indeed, on two occasions – 2001/02 and 2007/08 – teams who played the first leg away from home progressed. No such clean sweep has been achieved by the home sides in the first leg of each tie. Statistically proven but not as emphatically as football folklore likes to believe. Of course, his point was that it will take two excellent performances to progress. No argument there.

Reading comments around the web yesterday, I am stunned that people are nervous of this tie, entirely negative in some circumstances. Honestly, I do not understand that mentality. If you cannot look forward to matches such as these, then why bother following football at all. There are precious few big matches in a season; this will be the biggest that The Emirates has ever hosted, including last season’s semi-final. Perhaps it was the sense of anti-climax due to the performance on the night but this one seems bigger, possibly because United are a ‘routine’ domestic opponent.

Barcelona’s form over the last two seasons has been nothing less than outstanding. Anyone who is not impressed by them is blind or stupid, quite possibly both. Arsene will no doubt have spotted weaknesses and there have been occasions from those matches that I have seen, where Barca have appeared vulnerable. Even so, a team which has lost once in the League, once in the Champions League and once in the Copa del Rey cannot under any circumstances being treated lightly. The manager and players will leave the bravado to us in the stands.

Focus is drawn sharply back to this evening’s match. A win puts Arsenal top until tomorrow at least. A win is all that is required this afternoon. A resounding victory which adds substantially to the goal difference would be a bonus. With West Ham struggling, it is a match Arsenal should be confident of ending with maximum points. Hull gave an indication that those teams down at the bottom will be resolute in their defending, Arsenal will not take the outcome as a foregone conclusion.

Team news is mixed. The returns of Song, Fabregas and Rosicky are most welcome. Tinging that news with some disappointment were Arsene’s comment that Robin van Persie, although progressing well, is unlikely to play before mid-May. Perhaps it was a slip of the tongue on his part – and Wenger made the comment before the Champions League draw – but the Premier League season ends in early May.

The returning trio strengthens the squad. Whether all three will start is another matter although I would like to think that they are fit enough to do so. Fabregas will no doubt slot straight into his central role which is hard on Samir Nasri as his form in that position has been sparkling. I hope that he can continue this from a wide position, the fate he resigned himself to a while ago when he commented that although he knew playing on the flanks hurt his World Cup chances, he wanted to play for Arsenal and if Arsene put him on the wing, that is where he was happy to play.

That attitude is one that seems to pervade the whole of the squad with square pegs in round holes as the injury situation dictated. It is also the reason why English players rarely come to Wenger’s attention. Few are technically adept at playing the game in the style he demands, even fewer have the versatility to do so in a variety of positions.

Were I to pick the starting line-up, it would be as follows:

with a bench of:

A reminder of how good it is to see Arsenal at the top? This is the Premier League table from six years ago today (courtesy of When Saturday Comes): 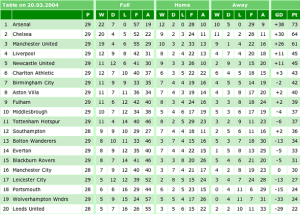 A repeat of those top 3 positions come Monday morning would be most welcome. Enjoy the match wherever you are watching it.